Cloud Atlas - Everything is Connected

"An exploration of how the actions of individual lives impact one another in the past, present and future, as one soul is shaped from a killer into a hero, and an act of kindness ripples across centuries to inspire a revolution." 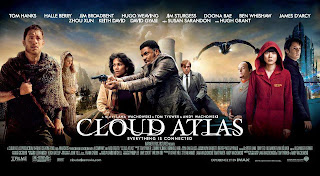 Cloud Atlas is a 2012 German drama and science fiction film written, produced and directed by Lana and Andy Wachowski and Tom Tykwer also nominated for the 'Saturn Awards' 2013... Well what isn't?

The Wachowski's of course gave us the Matirx Triology and its highly significant symbolic themes, not least when it comes to 'human enslavement' which is what Cloud Atlas also alludes to.
Where does one start? Well the the film consists of six interrelated and interwoven stories spanning different time periods. The film is structured, according to the British novelist David Mitchell and weaves together many 'parallel narratives - lives' that, as the author states in his book,

“Our lives are not our own. We are bound to others, past and present, and by each crime and every kindness, we birth our future. ”

The struggle for freedom over tyranny is encapsulated in its storyline, along with themes that can be found time after time in all myths and religions and more blatantly in today's art and film.
In all cases a force seeks to enlighten and liberate humanity, the other seeks to dominate and control and this struggle exists on many levels, even in today’s world. However, when one views opposites from a higher perspective, what we often realize is that both sides are 'projections' of the same source or knowledge. Even the word  ‘evil’ reversed gives us  ‘live’ and our  ‘life force’ can be used to do great works both good and bad. What we call past, present and future are all existing at the same time through our life-force. We are 'actors' playing roles in the great cinema of life, and Cloud Atlas illustrates this very well, in my view.

How we perceive the past and the future, as always, depends on what knowledge or information that is available to us in the 'present'. With human perception there is always 'more than one movie showing' at any one time.

Six movies in ‘One’ - Many lives in one
The movie 'moves' through 6 main plots, from the South Pacific, Cambridge, Edinburgh (UK) to San Francisco, a futuristic Korea and of course a place called Big Island where an isolated society are dwelling after what is called the 'Fall' (I’ll come to that later).